Race day can be stressful.  Of course you’ve trained but simply logging workouts isn’t always enough. You’ve worked hard for weeks on end to hit a goal time and the pressure is on. Luckily there are steps you can take to alleviate some of that stress for lots of success in your next big event.  Here are three additional ways each member of Team ECRP makes sure they’re ready for race day. 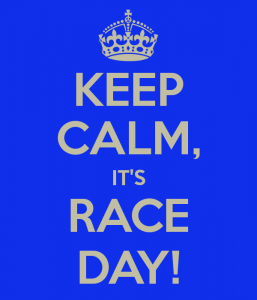 Practice.  Odds are you’re training.  Whether it’s a marathon or a 5k practice is important.  Prepare by running race pace workouts and figuring out a nutrition plan that works for your body.  Run in all kinds of weather since you never know what race day might bring.  Wear the clothes you plan to race in on a few training runs.  No one wants to miss that new PR because they had to stop for a gear issue.

Visualize.  The mind is a powerful thing and that makes visualization a very useful tool.  Imagine yourself crossing the finish line with your goal time on the clock and the excitement that goes with it.  Picture burning through the last mile of a 5k or struggling through the final 400 meters of a marathon.  Being more familiar with what the race will feel like only makes you tougher.  Get into the nitty gritty of what the weather is doing, how sweaty you’ll be, what it will smell like, who will be there.  You might have to adjust your weather visualization if the forecast changes but flexibility only makes you stronger.

Plan.  Race day can be anxiety creating even if you’re walking to the start line.  Driving can make it worse.  There might be traffic, full parking lots, stressed out runners, confused spectators and a guy with a dog on an extend-a-leash.  Having a plan will eliminate race morning stress by streamlining your path to the start and help you perform your best out on the course.  Look at parking maps, arrive early and pick up timing devices the day before if possible.  Choose a location to reunite with your support team at the finish.  Once a plan is in place you can sit back and focus on running an amazing race.

Use these tips to be physically, mentally and logistically prepared for an excellent race day experience.

No one likes to see a race course filled with hills.  It makes for harder work and less of a shot at a PR.  Fortunately there are big benefits to running hills while you train for any race, especially an up and down one. 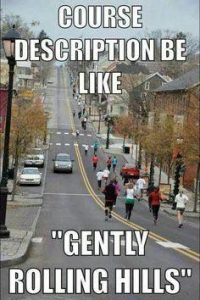 More muscle fibers have to fire and generate power to maintain your flat ground pace running uphill.  It also requires different muscles to work in different ways than flat running does and that’s good for building powerful running glutes.  In contrast, running downhill gives your quads tons of work to do and is also something that should be practiced regularly.

Build Confidence – If you can rock it in practice, you can beat it on race day.  Tackling hills on training runs is an invaluable tool in preparing for the unknown of an unfamiliar race course.  Being comfortable with running uphill a bit slower than race pace and down the other side a bit faster can be a huge benefit on a tough course.  Learning to control your downhill speed can also be a big help later on in a net downhill race.

Adding hill work to your training plan is important no matter what your next running goal is.  Make sure you use a qualified coach when you’re ready to start running hills so you do safely.

Mental toughness sounds cool, even useful, but what exactly does it mean?  A mentally strong athlete is dedicated, comfortable suffering and driven.  When the going gets tough they hunker down, embrace the suck and remember what they’re working for.  It’s someone who has the ability to cope with many demands in a consistently superior way to their opponents while remaining focused, confident and determined.  That’s the kind of athlete East Coast Run Project builds.

An invaluable asset in competition, mental toughness is more than just being dedicated.  Yes, believing in your goals is a huge part of succeeding but ‘mind over matter’ isn’t just something people say for the sake of saying something.  It’s true.  Your brain is programmed to sell you short.  Ever feel like you can’t run one more step then accelerate when the finish line comes into view?  A big fan of the status quo who’s adverse to pain and suffering your brain will shut things down long before your muscles.  Here’s a study that explains it in detail.  In short, your mental state does not always reflect your physical state.  You are truly stronger than you think you are.

Part of mental toughness is about accessing everything you’ve got.  Most importantly it’s finding the strength to use your brain to beat, well, your brain.  After you’ve accepted that your body can do more than your mind wants to you can use it perform at a higher level.  By misleading cyclists about a competitor’s speed this study discovered they magically had the ability to perform at a 2% (!!!) higher ‘maximum’ speed.  They pedaled faster than their ‘100%’ because they thought they weren’t there yet.  Their brains were tricked into thinking it was status quo when it wasn’t.

The fastest way to trick our brains?  Positive self talk.  Instead of muttering ‘this sucks’ or ‘is it over yet?’ in the middle of a muscle shredding workout, smile.  Saying ‘I got this’ or ‘this workout feels good‘ can actually make it easier.  It’s been shown that a repeated positive statement can give you the extra push you need to hit a new PR, finish within the time limit or conquer that fear.  Step one in developing mental toughness is finding that phrase.  Find the words that will keep you moving forward when things get hard and learn to use them.

Note: Telling yourself you’re fine when you aren’t isn’t always a good idea.  Injury and over training happen when we ignore and push through pain signals from our bodies.  Part of being a mentally tough athlete is listening to your body, knowing the difference between good pain and bad and knowing what’s on the line if you push past it.

Your cart is empty
Visit The Shop